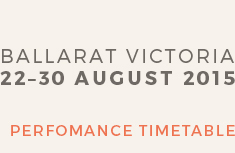 First event for Festival of Slow Music 2015 will be an all-night event of music and star-gazing at the Ballarat Observatory.

Two particular events will be:
– Space is the Place – a tribute to iconic jazz artist and interstellar traveller, Sun Ra – a 15 or so piece ensemble led by Adam Simmons in the style of his infamous Toy Band, strongly influenced by Sun Ra’s music.
– The Quiddity Concert – featuring Steve Falk, Elissa Goodrich, Martin Martini and Adam Simmons, who were each commissioned in 2014 to compose a piece for the Federation Handbells (managed by Museum Victoria on behalf of Creative Victoria).

Then there will be numerous performances between dusk and dawn by Deborah Kayser, Amie Brûlée, Martin Martini, Hue Blanes, Diokno Pasilan, Leah Scholes, Miranda Hill, Jeremy Dullard, Samuel James Boon and more – including our mystery drummer! Elissa Goodrich and Caerwen Martin will introduce the dusk and then bring us into the dawn.

Space is the Place is co-presented with the Ballarat Observatory with funding support from Australia Council and City of Ballarat’s Community Impact Grant Fund.

Buy Tickets – including options for camping, breakfast and telescope viewing

As part of Ballarat Arts Alive Artbus tours, Origami will celebrate their new CD about Australian identity with this unique travelling experience. A combination of music, street art, food and a bus trip, it will be a great opportunity for locals and visitors to explore Ballarat.

Origami’s new double CD, Billy Tea to Burgers, is inspired by the characters, landscapes, food and experiences of travel within Australia. For this event, they will be joined by several musicians including Leah Scholes, Miranda Hill, Diokno Pasilan, Ballarat Ukulele Kollective and more in a performance of “Here and There”, an aural version of an outback roadtrip.

Meet 4pm at Mechanics Institute – the tour will include visiting M.A.D.E/Saltbush Cafe, Ballarat Hamburger Cart and finishing back at Mechanic’s Institute approx 7pm.

This is being presented by Ballarat Arts Alive, as part of their successful and fun-filled ongoing series of Artbus tours to engage and learn about the way that artists live and work.

Kutcha Edwards – Aug 26 – Art Gallery of Ballarat
Fusing his soulful music, his rich and powerful voice with his life story, Kutcha’s music reflects on life as an Aboriginal man in white Australia. Kutcha’s deep and rhythmic tones are that of a storyteller whose inspiring songs are full of passion and spirit that evoke a connection to an intimate and resilient song line. “come walk with me…” sings Kutcha Edwards, as he invites us on his unforgettable journey of understanding, insight and memories. Kutcha will be joined by Dan Smith on acoustic guitar.

Presented by Art Gallery of Ballarat, funded by Creative Victoria as part of the 10th Anniversary of the Victorian Indigenous Art Awards.

For FoSM 2015, there will be
– Space is the Place – the Quiddity concert will feature the original four composers commissioned to begin the project, as well as having the Federation Handbells available throughout the night for the audience to interact with
– The Quiddity Commission – two commissions will be offered for Open and Youth categories, with the chosen ones to be performed as part of The Big Om concert on Fri 28 Aug.
– The Federation Handbells will be installed at Museum of Australian Democracy at Eureka for the duration of the festival

The Federation Handbells are managed by Museum Victoria on behalf of Creative Victoria.

This project has been assisted by the Australian Government through the Australia Council for the Arts, its funding and advisory body.

FoSM has a range of events that are accessible to everyone – and they may be free, but the quality is of the same standard, so they are a good way to see learn “slow music” is all about.

– Morning Meditations – 10am daily, Minerva Space – come, close your eyes, lose yourself with these intimate solo performances, no experience required!
– Lunchtime Piano Concerts – 1pm daily, Known World Book Shop
– Open Rehearsals – 6-8pm Mon-Thu, Minerva Space – be a fly-on-the-wall during the final preparations of some of the acts that will be perform on the final weekend – funded by APRA AMCOS